Eba & Wally, founders of Société Maitea, hope to make a difference to the local community. 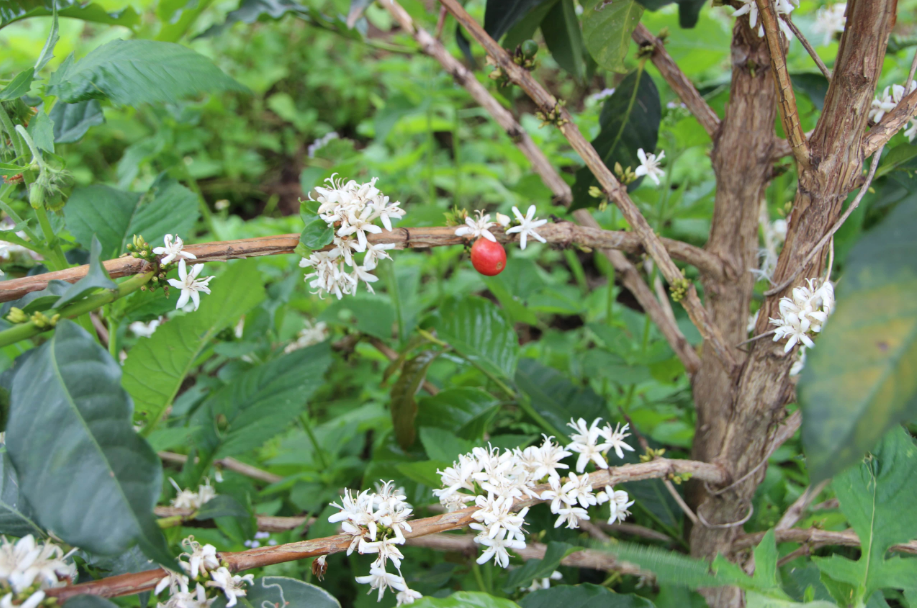 Minova, a town plagued by its once dark history of war and sexual violence, today looks to escape its past. Using coffee production to forge a path for economic success and social stability, Eba & Wally, founders of Société Maitea, hope to make a difference to the local community, as well as to demonstrate the quality of DRC (and in particular Kivu province) coffee, to the outside world. 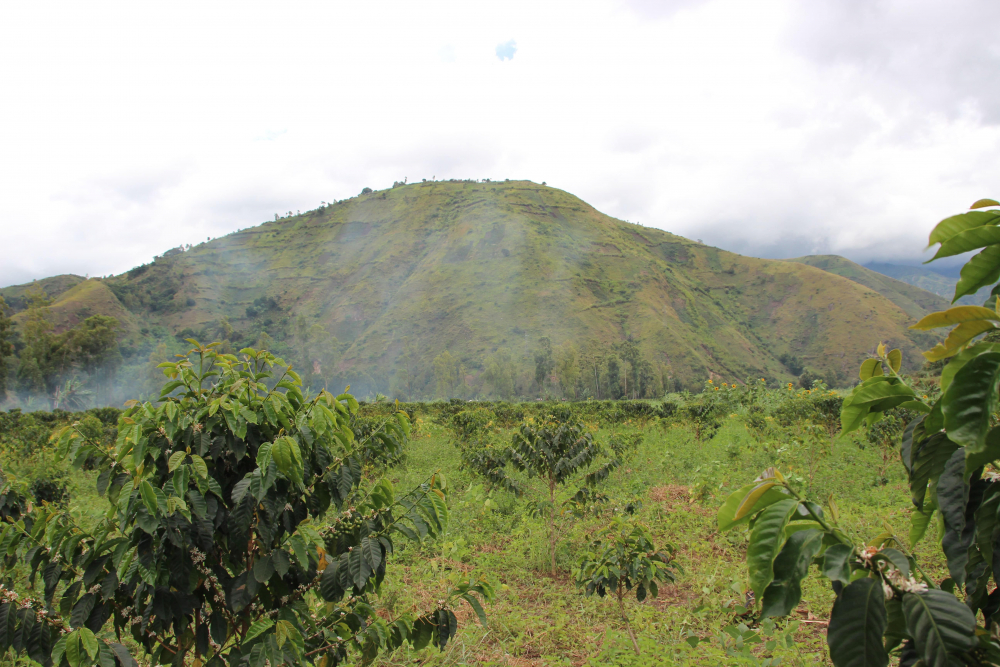 Minova sits at the head of Kabuno Bay

Located to the north of the Democratic Republic of Congo (DRC) provenience of South Kivu, close to the Rwandan border, Minova sits at the head of Kabuno Bay; perched at the tip of Lake Kivu. Since 1994, the town has grown considerably in size, primarily due to influxes of refugees from both the 1st and 2nd Congo wars, as well as subsequent fighting in the area: leading to for many, malnutrition and a lack of security. Sadly, the town of Minova is often associated with terrible events of the past. In 2012 Congolese soldiers entered the town after an unsuccessful conflict with M23 rebels, and carried out a horrific spree of sexual assaults.

As a result, the town became known for the ‘Minova Trial’ of 2014, the largest rape tribunal in the history of the DRC. The Minova trial looked to bring those accountable to justice. However, due to suspected foul play during the trial, only a few junior officers were convicted, sparking international outrage and later resulting in the summit against rape in warfare, held in London. Now a few years later, the area of Minova and South Kivu look to move away from the image of their dark past. 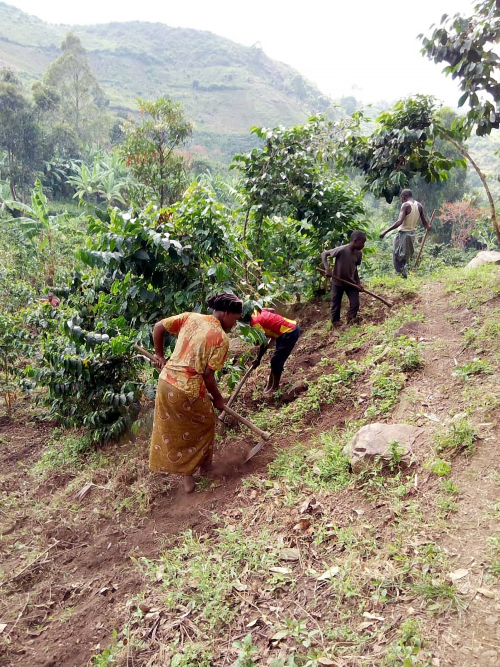 Since 2014, Little by little, the economy of the region has begun to grow; thanks to the help of international partners, who came looking to purchase coffee. Unfortunately, these initial purchases were bought at very low prices. This meant problems such as malnutrition, health and schooling, continued to go untreated.

In 2018, in came Société Maitea owners, Eba & Wally. Eba Murua (Biologist and Primatologist) and Wally Mahindu (enthusiast and all-round coffee expert) are working tirelessly to rid the Kivu region of its tarnished repute, as well as improve the social development of its people. With the help of their exceptionally hard-working team, this year (2019), Société Maitea and the local cooperative, have been able to produce their first fully washed Arabica lot from their washing station located in Minova. 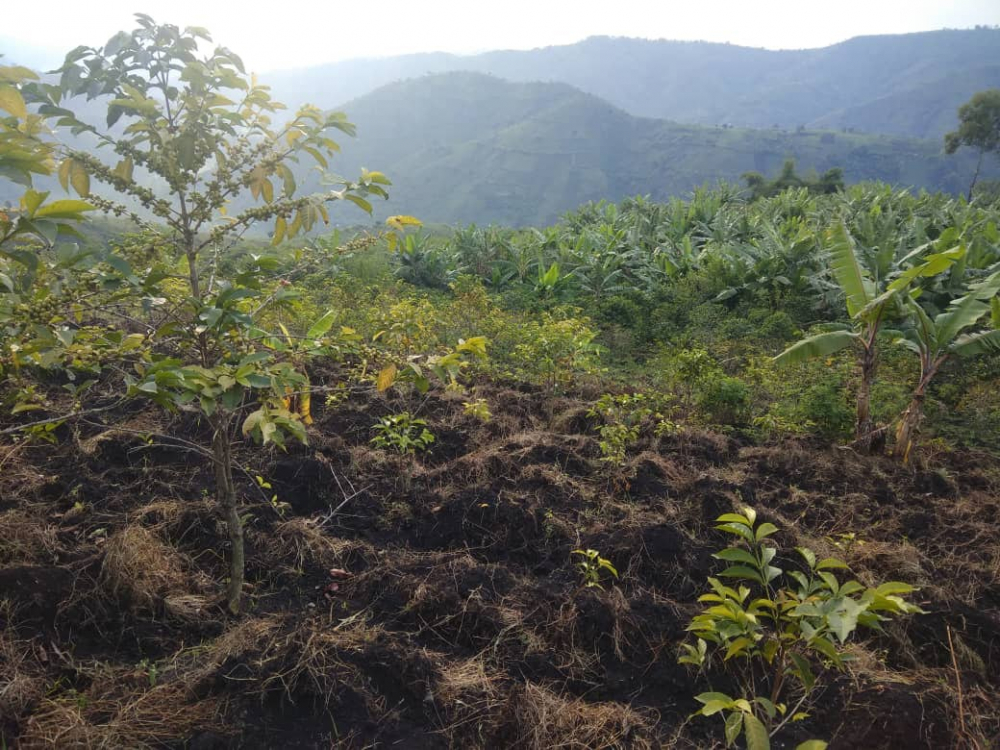 The province of South Kivu benefits from fertile soil. This makes the area a rich location for farming, with compost primarily being the only fertiliser needed. When colonization ended for the DRC in 1960, a plot of land was distributed back to each farmer. This means that each individual on average will own less than one hectare, meaning annual coffee production tends to be as small as 750kgs (12 sacks) per farm. To supplement their income, farmers grow a variety of other produce such as : beans, corn and bananas; providing income stability year-round. 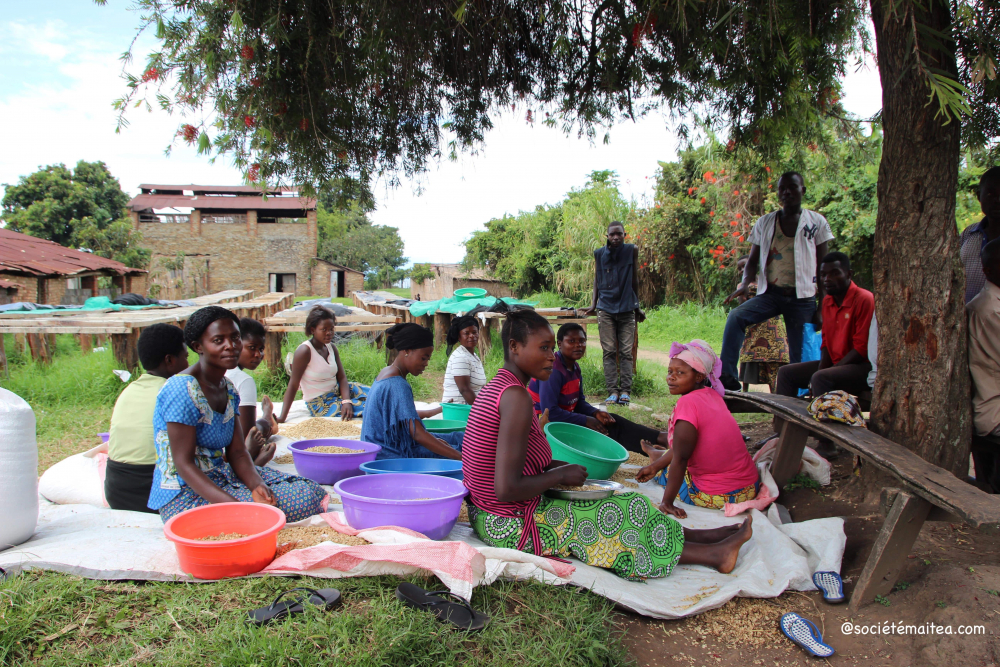 Although the tide is beginning to turn for Minova, farmers in the region still face challenges; such as access to land, security and in particular, the threat of climate change. Due to its location close to the equator, the DRC benefits from two annual harvests; a primary crop during the winter months, plus a smaller fly crop in the summer. Due to unusual variations in weather, Eba & Wally note it is becoming exceedingly difficult to predict and plan which will be the larger of the two. This, in turn, has led to reduced production and total output for the region.

To combat this issue, the world coffee organisation (WCR) and the National Institute of Agricultural Studies and Research (INERA) are experimenting with new varieties, to increase productivity and help speciality coffee thrive in the area. Traditionally, the Bourbon variety has been dominant in much of the region, including neighbouring countries Rwanda and Burundi; originally first introduced and financed by international organisations during the colonisation period. Although progress is being made, speciality is only just gaining a foothold among producers in the DRC, with coffee production predominantly still a Robusta economy and less than 25% of the market reserved for speciality. 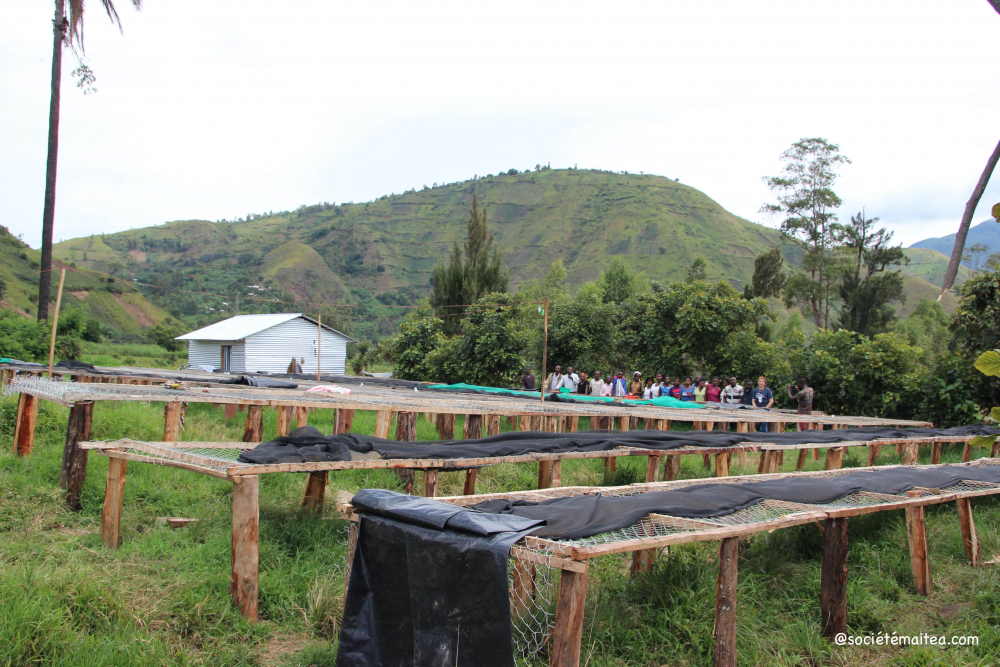 Washing stations can be found on average every 2km in the region, with Société Maitea using their Lake Kivu site to process and classify coffee brought to them by farmers. Coffee is processed in ‘day lots’ with assessment for classification beginning with coffee cherry being placed on canvas beds and sorted; removing any undesirables such as immature beans or coffee husks.

Next, cherries are submerged in cold clean water and floated, to separate the quality cherry (sinkers). Any fruit that floats is removed, often to be sold on the internal market or reused as compost. Next, coffee cherries are pulped, before being left to ferment for 12 hours overnight (from 8 pm to 8 am) in a dry fermentation tank. Finally, coffee is washed to remove any final impurities and bad coloured parchment, before being dried and graded; ready for export. 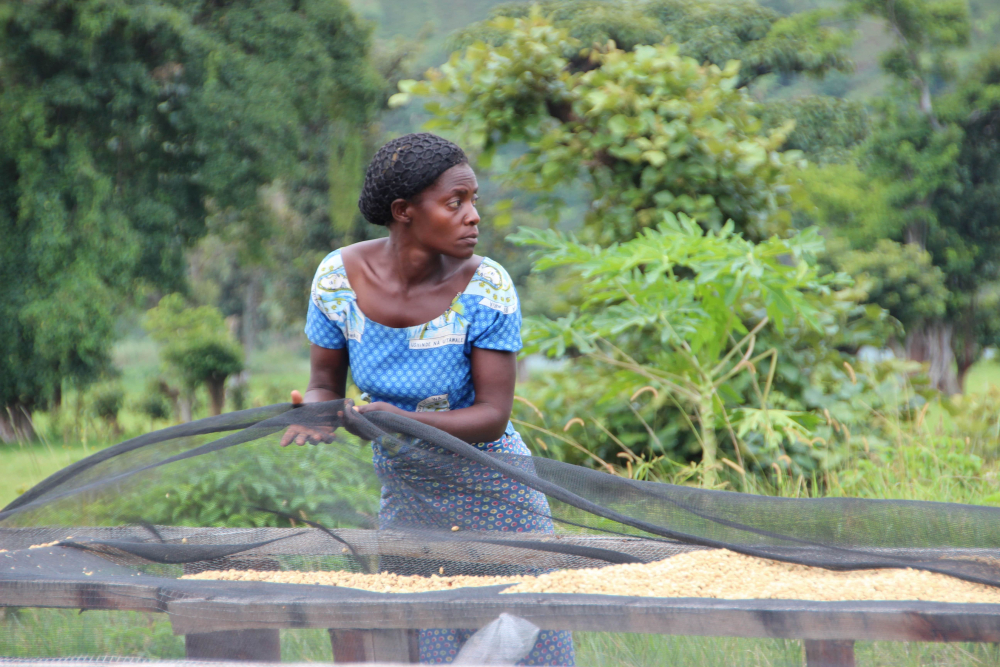 By producing truly excellent coffee, Société Maitea is working to help the social development of the population with which it works, via their newly formed Matiea Foundation. The primary objectives of the foundation are to improve health, education and conservation awareness. Societe Matiea aims to achieve this by a variety of means:

Health: support women living in dangerous conditions, as well as feed malnourished children via the one meal for every child program

Education: increase literacy for women in coffee, as well as the creation of speciality programs for children with disabilities (currently unavailable in the region)

Conservation: improve Nature and conservation awareness in the region, via their partnership with Goma schools

Although currently there are no conservation or environmental programs in the region, Eba and Wally are planning to change this. As Société Maitea only began supplying their Arabica lot in 2019, first steps such as building a water pump and compost management are already underway.

As of September 2019, Maitea is now also taking part in farming projects in schools, helping provide education to the next generation. Eva and Wally’s commitment to fighting the issues they are currently facing makes us wholeheartedly believe in their efforts to benefit the community and to combat the threats of climate change. We are sure as Société Maitea continues to grow, they will continue to nurture change for the better and we are proud to be supporting their efforts. 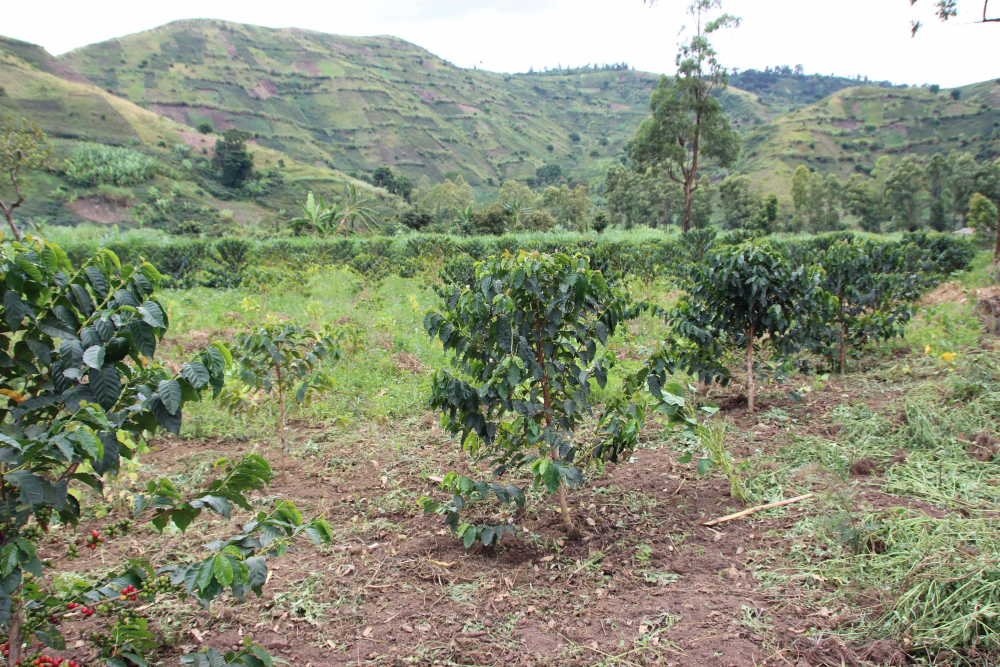